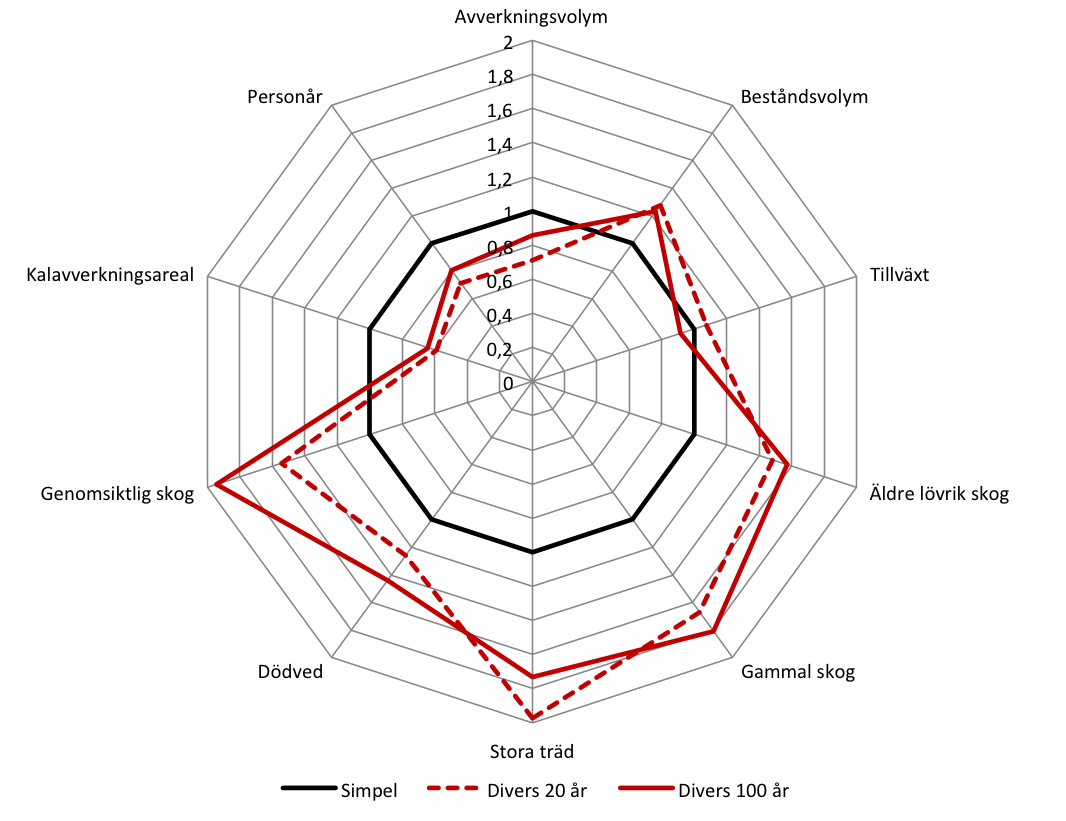 Taking into consideration how forest owners actually intend to manage their forests, felling volumes will be 14% lower in the future while ecological values will benefit.

Forest owners manage their forests in different ways. Management strategies can vary from nature conservation to increased production, or to increase the timber stock, for instance in anticipation of a coming generation shift. Some owners have no stated strategy, but can rather be described as passive. If one assumes that forest land is managed the same way by everyone, there is a risk of overestimating future wood supply, or missing the fact that ecological values and recreation benefit from diversity in forest management.

Jeannette Eggers has studied how the forest’s development over a period of a hundred years differs depending on whether one takes into account the different management strategies of owners. With the help of the Heureka system’s software RegWise, Eggers simulated two scenarios. In the first, “Simple”, it was assumed that all private landowners managed the forest the same (based on the reference scenario in SKA08). In the other scenario, “Diverse”, it was assumed that the privately owned land was managed according to five different strategies:

The strategies were created based on the answers of 1,169 private forest owners in a survey on forest management.

In the second (“Diverse”) scenario, a 14% lower felling volume was found over a period of a hundred years, compared to the “Simple” scenario. The growing stock increased, and indicators associated with ecological values and recreation benefited: “If you throw all owners into one big pot you might overestimate the potential felling volume, and underestimate indicators tied to the forest’s ecological and social values” says Jeannette Eggers.

Above image: Relative difference of included indicators in Hässleholm for the two scenarios after 20 and a hundred years, respectively.

The study was conducted in the municipalities of Hässleholm and Vilhelmina, within the framework of PLURAL, a project financed by FORMAS “Starka forskningsmiljöer” 2012-2017.

SKA (skogliga konsekvensanalyser, forestry impact analyses) is produced on a regular basis by the Swedish Forest Agency in cooperation with the Swedish University of Agricultural Sciences (SLU). Based on a number of simulated scenarios in which Sweden’s forests are used and managed in various ways, the consequences are measured over a period of a hundred years. The analyses offer detailed information on the conditions in the forest, which can then be used as a basis for decision-making in issues involving the long-term use of forest land.

Torgny holds a PhD in Forestry, and works a great deal with the decision support system Heureka and its software, as well as forest inventory. Torgny conducts analyses of the development of the forest as a resource over time for larger areas, with the help of scenario analyses; he also conducts sustainability analyses connected to the forest as a resource, with attention to the entire value chain from forest to final product. Torgny is active at the Department of Forest Resource Management at the Swedish University of Agricultural Sciences.

Tomas Lämås is an associated professor who research about forestry planning in a wide perspective, primarily regarding decision support systems (DSS) for multi-objective forestry. As a part of this, Tomas is heading the program for Forest Sustainability Analysis (SHa) that uses the Heureka DSS as a technical platform. The mission statement is that through competence, personal and tools provide an infrastructure for sustainability analysis within research, education and commissioned work. A particular focus is on adapting the Heureka DSS in a relevant way for new problem areas. Tomas works at the Department of Forest Resource Management at The Swedish University of Agricultural Science.

Karin Öhman is an associated professor that through her research develops new tools and models that can be used for planning of a multi objective forestry. The research can be divided in two parts. The first part concerns optimization and is a qualitative tool that can be used to find optimal solutions based on specific objectives and constraints. The optimization gives us possibilities to investigate the cost connected to one objective for getting more of another objective. However, to find the solution that represents the best balance between different objectives we also need to know the preferences of the decision makers. As a result, the second part concerns how decision makers and other stakeholder’s preferences may be included in the planning process by using multi criteria decision analysis. Multi criteria decision analysis gives us the possibility to make trade offs between the objectives and it is the preferences of the decision makers that decide. Karin works at the Department of Forest Resource Management at The Swedish University of Agricultural Science.